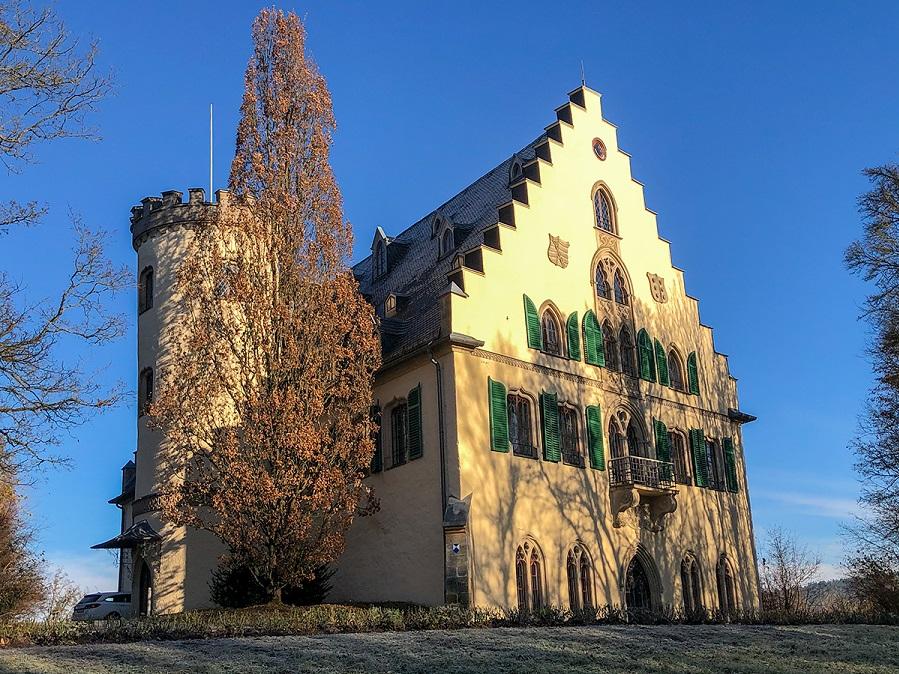 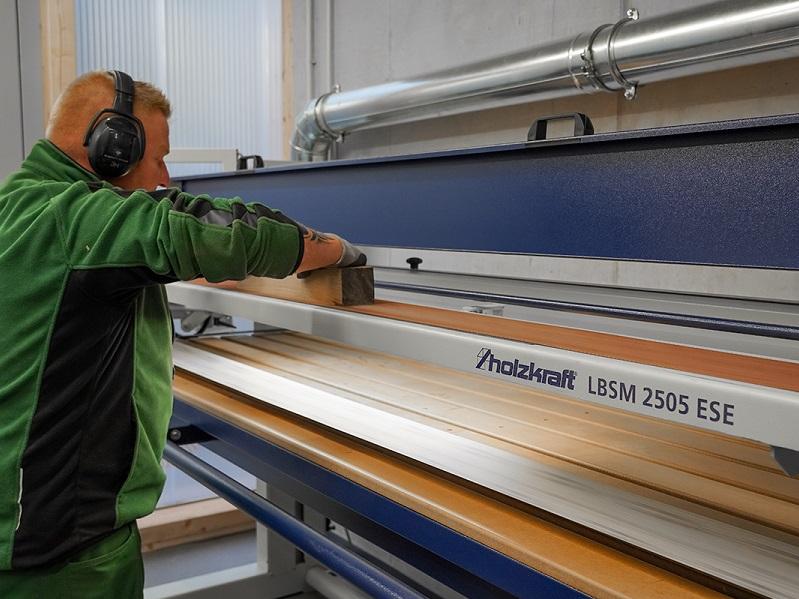 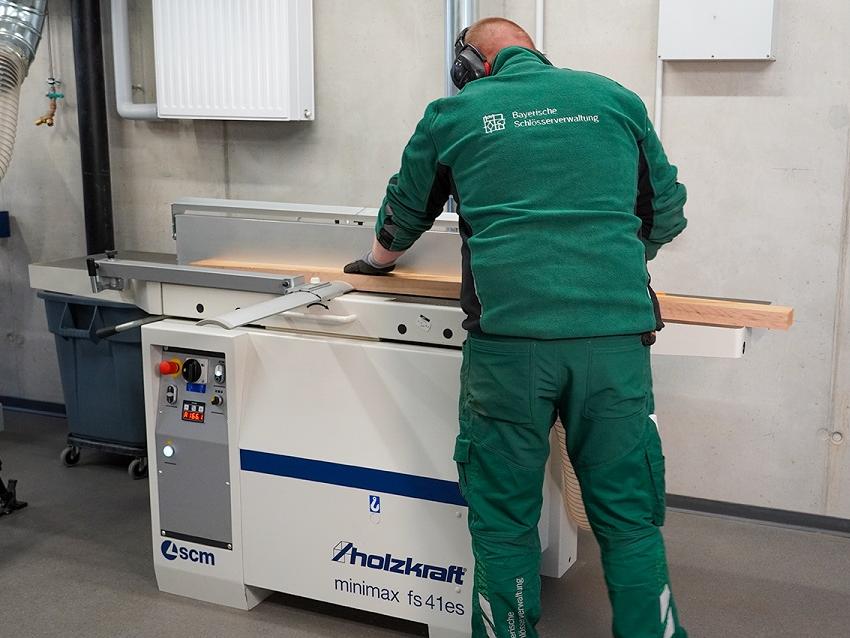 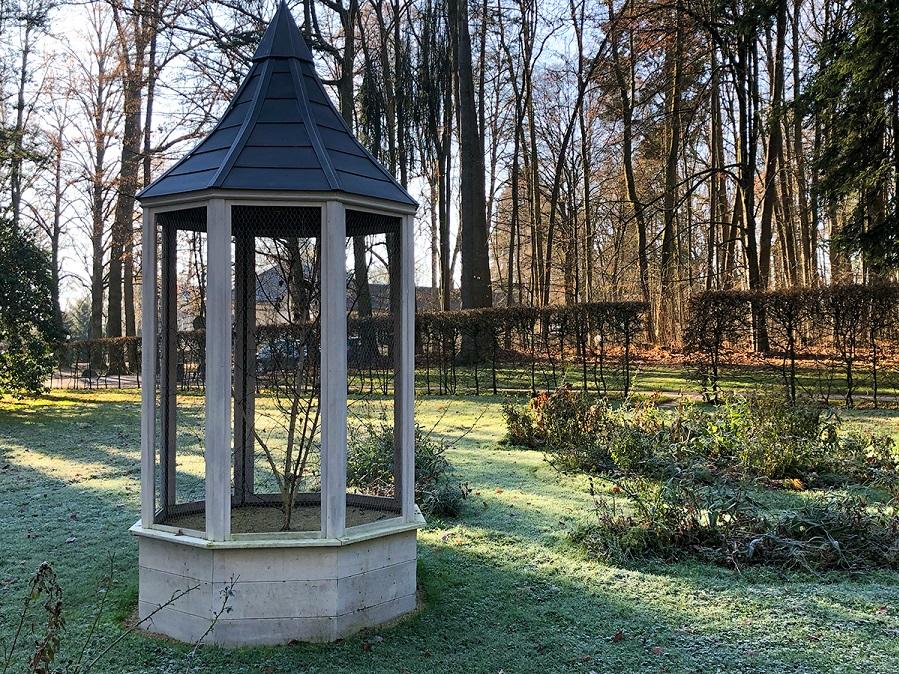 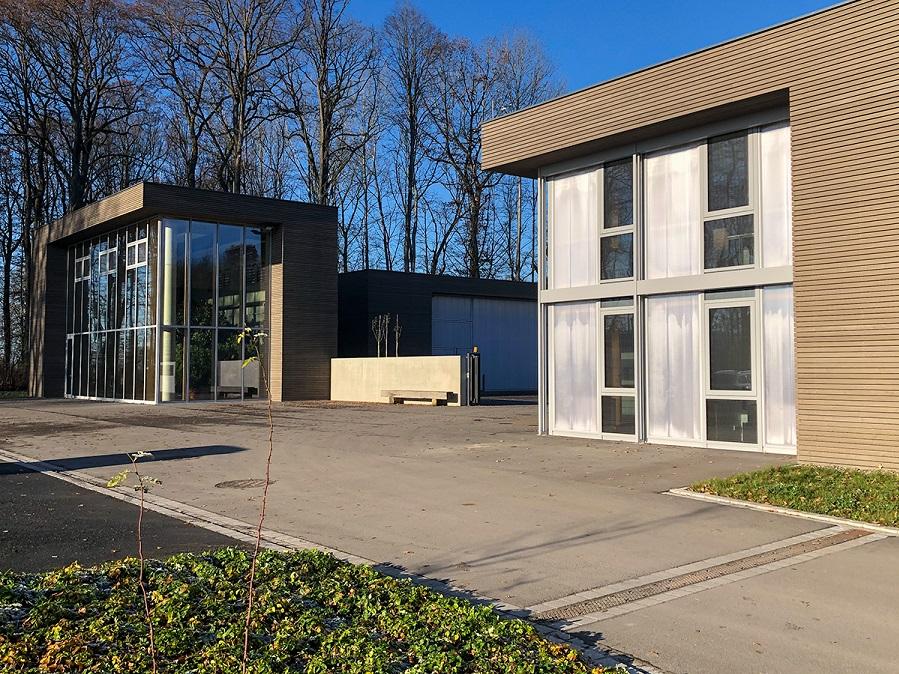 A swan house, an aviary, planters or park benches: the wooden objects that carpenter Christoph Schäftlein creates for Rosenau Castle Park are diverse. But they all have one thing in common: they are historically accurate replicas, created in painstaking detail work according to the strict specifications of the Bavarian Palace Department with a great deal of passion and sensitivity in order to preserve the appearance of the 19th century park as true to the original as possible. With a carpentry workshop now set up specifically for this purpose, Rosenau Castle occupies a special position and can meet any historical requirements with an optimally coordinated ensemble of HOLZKRAFT machines.

Rosenau Castle looks like a Sleeping Beauty castle from another era when you approach it via the increasingly narrow access road. Far from any hustle and bustle, the former seat of the Coburg dukes is embedded in an extensive park based on the English model, which to this day blends seamlessly into the surrounding landscape without any enclosing walls. Two ponds, the remains of an artificial waterfall, a sundial, a tea house and an orangery are reminders of the lively activity of bygone days. At that time, the castle complex covered 200 hectares, of which about 40 hectares are still preserved today.

Preservation of the historic park design as the primary goal

The top priority for all upcoming wood projects is to preserve the historic appearance of the castle park as far as possible. The park landscape, which was laid out in 1805 as an "ornamental farm," uniquely combines agricultural and horticultural areas and buildings with artistically designed elements. Kitchen gardens, orchards, tree nurseries, a pheasantry and a Swiss farm adorned the grounds at that time. Even Queen Victoria raved about the romanticized park with the later famous quote, "If I weren't what I am, I'd have my real home here." That is why it is also a tradition to replace fallen trees with trees of the same species at the historic location.

Manufacture of wooden objects for outdoor use

In striking contrast to the neo-Gothic style of the castle is the new factory premises of the park complex, which appears very modern with its wood and metal elements. It was not until the summer of 2021 that it was put into operation and it now houses a carpenter's shop, a locksmith's shop as well as other workshops and storage areas. Three days a week it smells like freshly sawn wood when Christoph Schäftlein works on his projects for the outdoor facilities with the HOLZKRAFT machines. It is not just a matter of his manual skills. His work also requires a great deal of creativity and historical understanding. Because in some cases Schäftlein does not receive any prefabricated work plans from the palace administration in Munich, but only historical pictures as specifications, according to which he makes park benches and planters in the style of the time.

When Schäftlein works in his woodworking shop, he always has to think carefully about how best to allocate the space, because there is not a lot of space available in the castle carpentry shop. That is why he was enthusiastic about the combined machine technology from HOLZKRAFT right from the start: "The combination machines are simply ingenious because you don't need a separate machine for every application and can save a lot of space this way." This means he can conveniently switch between different applications in just a few steps. The Fs 41 elite S Tersa surface and thickness planer, for example, can be converted in no time at all, allowing two operations to be performed with a single machine. Same for the minimax st 5es saw mill combination, which not only delivers precise sawing results, but is also suitable for chipping thanks to the integrated moulder. Schäftlein can also remove the rip fence so that when not using it he can comfortably move around the room. The LBSM 2505 ESE long belt sander takes up the largest area in the compact workshop, but its flexible use justifies the dimensions in every respect. Over a length of 2500mm, the sanding belt whizzes in an endless loop over the long wooden boards that will one day serve as seats and backrests for new park benches. With the integrated sanding shoe, Schäftlein skilfully zigzags over the sanding belt to achieve the most even sanding results possible. With just one movement, the carpenter turns the sanding unit by 90 ° and with this setting can now sand the edges smoothly and round.

Larch and oak for park benches, planters or aviary

Most of the wood Schäftlein uses for his work comes from the park's own tree population. If a tree falls or has to be felled, the wood is then cut and made available to the carpenter for the production of park benches, planters and other historical replicas. Hardwoods such as oak and softwoods such as larch are used by him particularly often, as their durability makes them ideal for outdoor use. Occasionally, the experienced carpenter is faced with completely new challenges. For example, he recently made an aviary, a birdcage for the open space, which can now be admired in the prince’s garden of the castle park. "But there are no birds in it," says Schäftlein with a smile, "that would no longer be allowed in today's world." Rosenau Castle Park is certainly a special working environment for the carpenter, because working in such a historic setting also means being in the public eye: "You build things for the park and you see them again and again when you take a walk here. It's nice to still be able to admire your projects years later."

When setting up the carpenter's workshop, the castle administration opted for robust, easy-to-operate and reliable machine technology so that even larger wood cross-sections can be processed conveniently. But the decision-makers also focused on good support and a single contact person who can be turned to quickly and easily. With the new machines from HOLZKRAFT, the castle’s carpentry shop can now carry out a variety of applications in the park on its own despite limited space: whether sawing, planing, dressing or grinding. This gives Rosenau Castle a special status among Bavarian castles, as such an extensively equipped carpentry workshop is not commonplace. Only the cutting of logs from the castle's own tree population now requires a service provider.