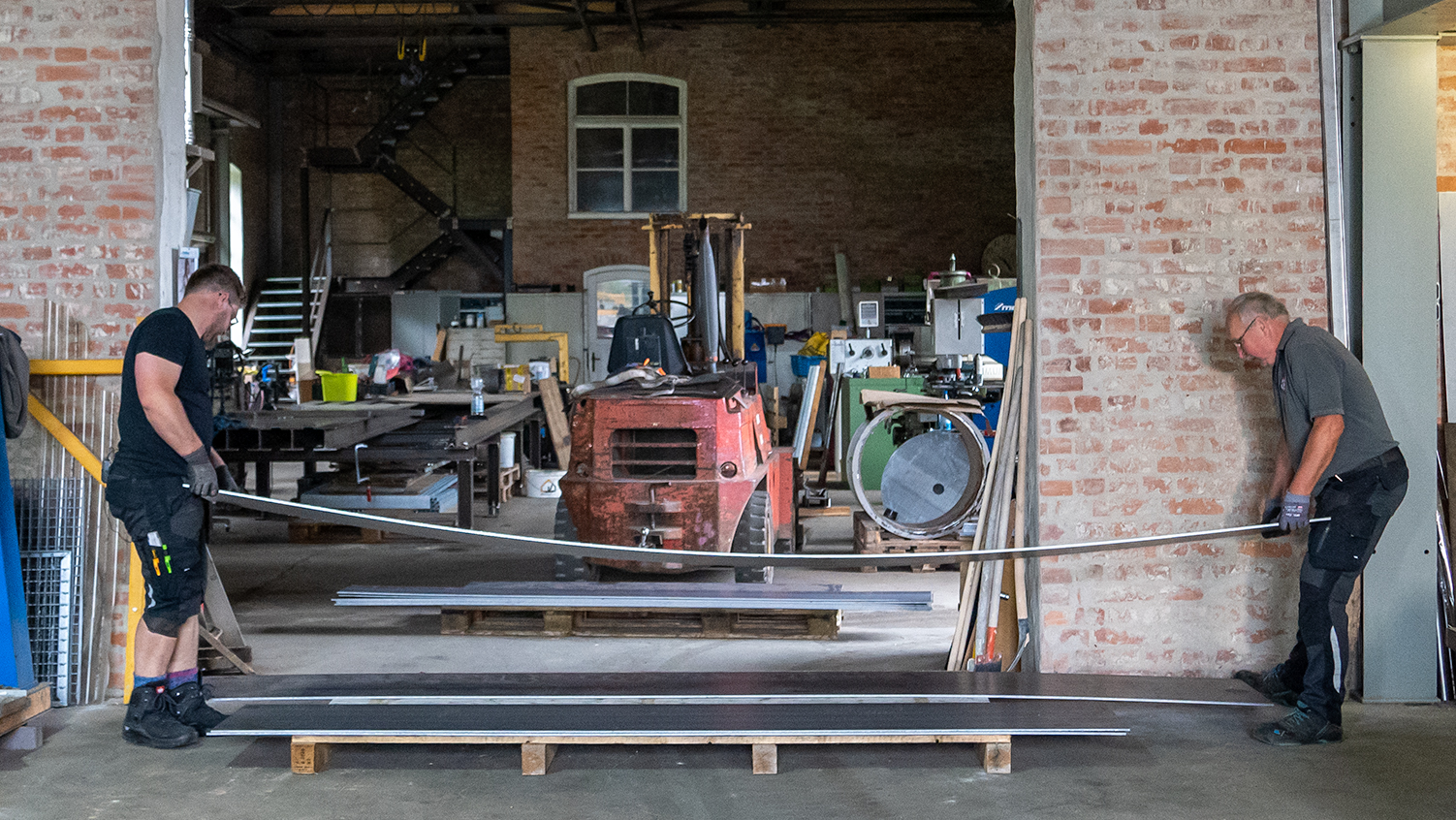 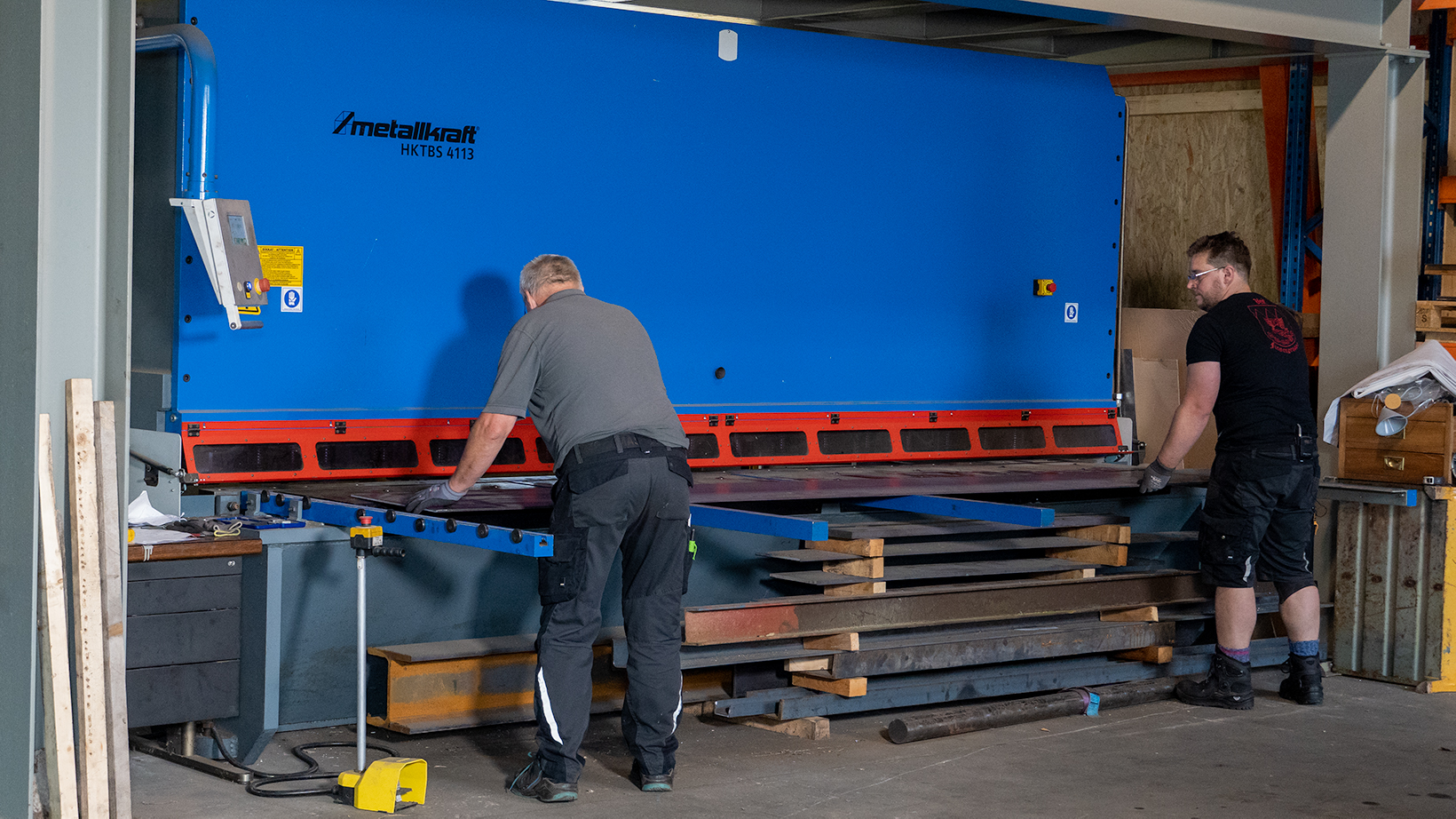 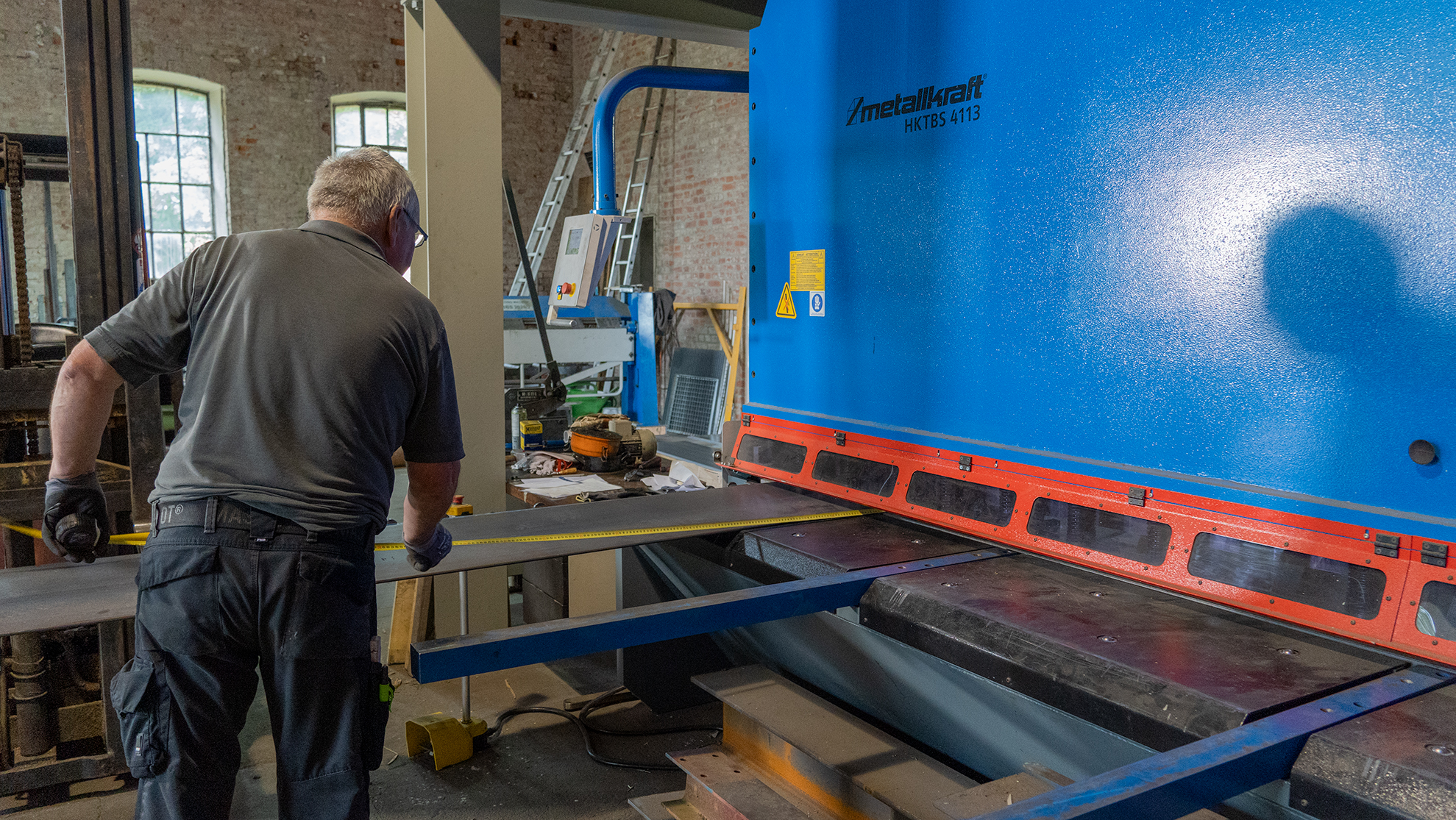 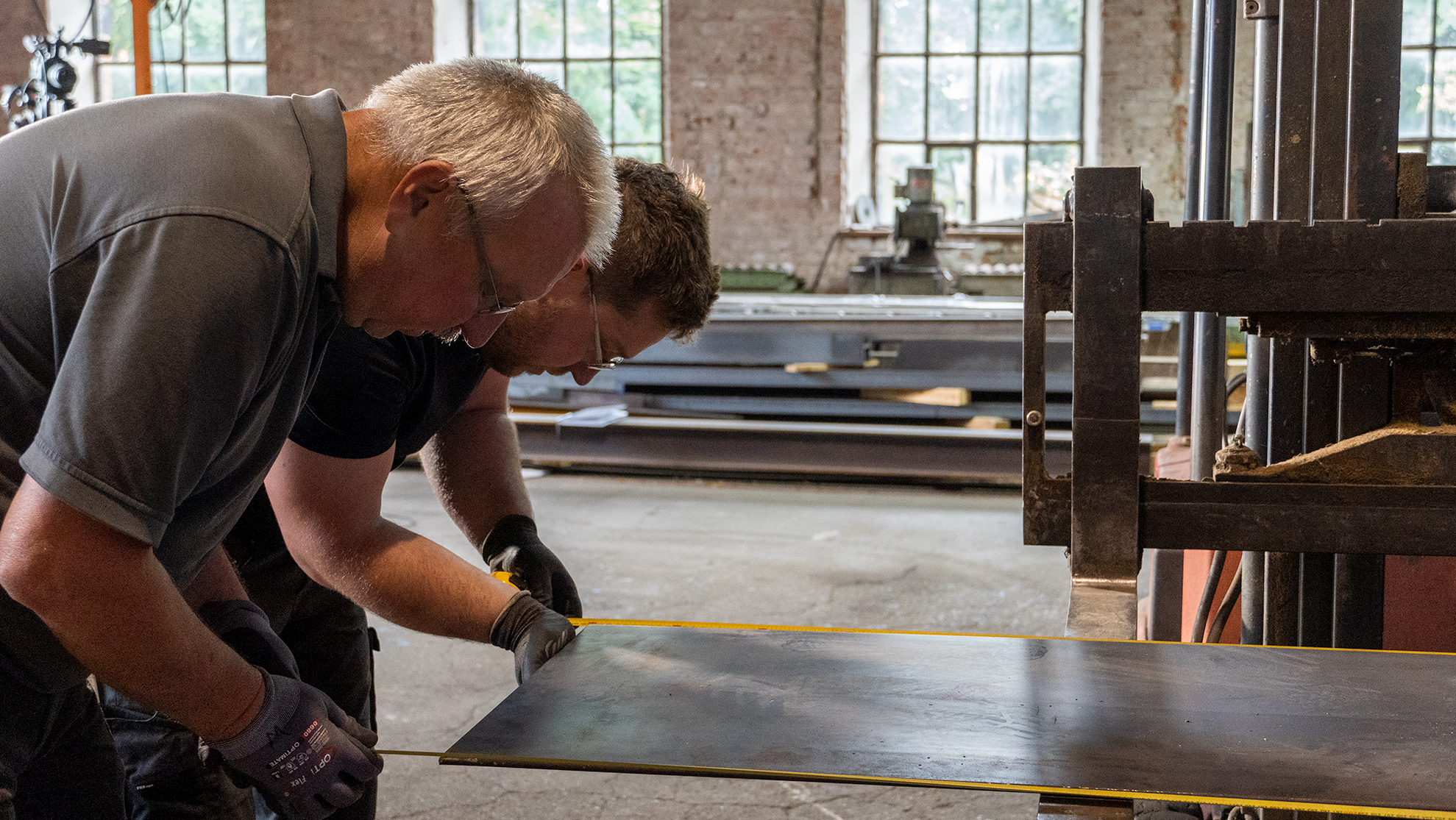 Precision work is required when master locksmith Fabian Veit uses a forklift to place the monstrous metal plates on the support arms of the Metallkraft sheet metal shears. Always at his side is father and senior boss Karl-Otto Veit, who guides him with meticulous precision to the exact spot where he can lower the steel plate. A measuring tape is pulled out to check the positioning of the metal plate one last time before it enters the machine. Then a loud bang echoes through the former railway premises and the sheet metal shears release the precisely cut metal strip on the back side.

The historic engine shed near the Bamberg train station has been the home of the Veit locksmith's shop since 1996. Where railway wagons were once manufactured and rail buses serviced, there is now a high-bay warehouse stocked with metal plates of various sizes. From these, the father-son team produces railings, staircases and balconies, pavilions, roofing and carports that are used all over Germany. The two have even completed orders in Italy.

Father and son are a well-coordinated team. Together they lift the 4m long metal blanks with their bare hands and place them one after the other on a pallet. It all looks easy, but in fact a single metal strip weighs 140 kg. The sheet metal cuttings will serve as the edging for the paved surface of a terrace, explains Fabian Veit: "This way, the existing height difference between the house and the natural ground is evened out with very little effort." The order is part of a mini house project that is currently being realised in a model house park in the region.

Extra-long cuts unique in the region

The fact that locksmith Veit offers such a wide range of sheet metal cuts was not always the case. For many years, metal sheets had to be cut with the flex or commissioned. However, this has changed with the acquisition of the large-dimension HKTBS 4113 sheet metal shears from Metallkraft in 2017. Not only are the work steps now much easier, but the range of products and services has also been further expanded. In the meantime, the family business even occupies a special position in the region, because now metal plates with a length of up to 4 metres can be cut, which is not common practice. "Many metalworking shops work with machines that offer a maximum cutting length of 3 metres," explains Fabian Veit. "Thanks to the Metallkraft sheet metal shears, we can now meet individual requirements even better and have gained numerous new customers."

At first, the two master locksmiths were not aware of how much the hydraulic sheet metal shear would actually make their daily work easier. Only a visit to the Stürmer demonstration center gave them an insight into the machine's extensive equipment options. What immediately caught their eye was the wide range of applications of the sheet metal shears, which precisely cuts thin sheets as well as thick sheets with a thickness of up to 13 mm and a length of 4m. Since they process a wide variety of sheet metals, they quickly became enthusiastic about the 2-stage sheet holding device. This allows thinner sheets to be easily cut without sagging during the work process. The option of extending the front support arms also suited the father-son duo, as this makes it easy and comfortable to handle larger metal plates. They also quickly agreed on the split finger guard along the entire length of the machine, because safety was the top priority. The sheet metal shears in the locksmith's shop are therefore anything but a standard machine and were specially tailored to the needs of the workshop. "That was great advice," Fabian Veit sums up the visit to the Stürmer company´s headquarters in Hallstadt. “We learned a lot about special functions and all of our requests were met. It's just fun to work like that! "

Tradition in tune with the times

When the 30-year-old junior boss carefully places the heavy metal plates on the sheet metal shears, every move is secure. For a long time it was not at all clear whether Fabian Veit would join his father's company. He originally had a career in the military in mind. But after his father was absent for a long time due to illness, he decided to take over the company and continue the family business in the fifth generation. Maintaining traditions is a top priority in the locksmith family. Therefore, in 1996, the decision was made to relocate the locksmith's shop from the Bamberg Hain area to its current location, thus protecting a former railway servicebuilding from decay. Today, the high ceilings are ideally suited for use as parking and storage space. Although the hammering sound of the railway wagons has now fallen silent, the history in the premiseshas remained alive to this day and gives the metal workshop a very special charm: "The ideal thing here is that you live with the buildings. It's like a vintage car, you just love it because it's old and historic," says senior boss Karl-Otto Veit. While in the past century around 1,500 employees of the Deutsche Bundesbahn were running back and forth - in maintenance buildings, a carpenter's shop and a specially set up coking plant - there is now a modern machine park that makes individual customer requests made of metal come true.

The sheet metal shears from Metallkraft will not stand still at the locksmith Veit´s premises in the future. Stainless steel cladding parts and guide plates for conveyor belts are the next upcoming projects in which the razor-sharp blade will deliver high-precision cutting results. Also, a new investment has already been initiated. In order to be able not only to cut large formats, but also to bend the blanks afterwards, father and son have decided to purchase a press brake from Metallkraft. This will enable them to expand their range even further and open up a new market in the region in the field of sheet metal processing.